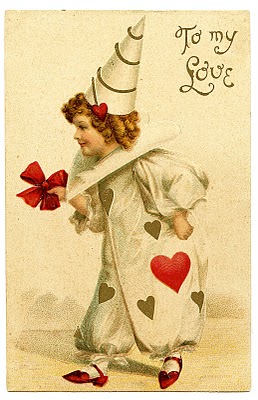 In case you are wondering how it all began…here are a few Valentine’s Day Facts!

Saint Valentine’s Day is an annual commemoration held on February 14, celebrating love and affection between intimate companions. The day is named after one or more early Christian martyrs named Valentine …it is traditionally a day on which lovers express their love for each other by presenting flowers, offering confectionery, and sending greeting cards (known as “valentines“).

The day first became associated with romantic love in the High Middle Ages, when the tradition of courtly love flourished.

Modern Valentine’s Day symbols include the heart-shaped outline, doves, and the figure of the winged Cupid. Since the 19th century, handwritten valentines have largely given way to mass-produced greeting cards.

The U.S. Greeting Card Association estimates that approximately 190 million valentines are sent each year in the US. Half of those valentines are given to family members other than husband or wife, usually to children. When you include the valentine-exchange cards made in school activities the figure goes up to 1 billion, and teachers become the people receiving the most valentines.

The rise of Internet popularity at the turn of the millennium is creating new traditions. Millions of people use, every year, digital means of creating and sending Valentine’s Day greeting messages such as e-cards, love coupons or printable greeting cards. About 15 million e-valentines were sent in 2010.

Over 50 percent of all Valentine’s Day cards are purchased in the six days prior to the observance, making Valentine’s Day a procrastinator’s delight (Source: Hallmark research).(According to History.com!)

Here is one more source if you are just dying to know more about my favorite holiday: Valentine’s Day History

This site uses Akismet to reduce spam. Learn how your comment data is processed.